The Origins of Minecraft

What is Minecraft? Minecraft is a survival, creative and building game. You can use your imagination in creative mode, where you have unlimited resources in the game, or you can choose the hard way, and choose survival mode. If you start a game of Minecraft in survival mode, you will pop up into a world with just a fist. You then have to gather materials including wood, stone, iron, meat and other necessities. You can also create swords, potions, pickaxes, and special things that help you go to different worlds to kill bosses and get special materials and weapons.

You might be wondering though, how do I get this stuff? You may even ask: What is Minecraft anyway? In survival mode, you have to use your brain to make life or death decisions. You can kill cows, sheep and even octopi. You can also chop down trees, and mine diamonds and iron. With these resources, you can create iron pickaxes and diamond swords.

Some fun facts are, that the first version of Minecraft was created in just six days! Also, Minecraft was inspired by several other games, and creepers were first created as a coding error, of what was meant to be a pig. 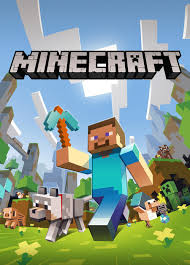 How did Minecraft become one of the most popular video games? Minecraft started when designers Mark Persson and Jens Bergensten released Minecraft in Stockholm, Sweden. The game was released on May 17, 2009. Some things you might want to know about Minecraft is Markus “Notch” Persson began developing the game as a project. He was inspired to create Minecraft by several other games such as Dwarf Fortress, Dungeon Keeper, and later Infiniminer. Also, to explain what creepers are, creepers are a living thing that when you get to close they blow up. Anyway, someone made a coding error whilst trying to make pigs, but it turned out to not be a big mistake at all. At first the game’s name was supposed to be “Cave Game” until the game was changed to “Minecraft: Order of the Stone” then to just“Minecraft”, which is the current name.

Something else that you may have not known is that Minecraft was made for education. Did you also know that as of now, Minecraft is the best selling PC game selling a whopping 28 million copies sold. While Markus Persson and Jens Bergensten were creating Minecraft, they said some things about Minecraft. One quote is “The design process for Minecraft is very random”. Every year there is a convention called “Minecon” that anyone can go to. Minecraft can be played on Xbox 360, Xbox 1, Xbox One X, Xbox One S, PC, phone, ipad, PlayStation 3, Playstation 4, Nintendo Switch, and other smart devices that will support it. On Xbox and PS4 it cost 20 dollars. On PC it costs 25 dollars. On Mobile 6.99 dollars. On the Switch it costs 30 dollars. On consoles like Xbox, or PlayStation their are different versions of Minecraft that you can buy to play. Minecraft is a very enjoyable game that you can play with your friends whenever you want. If you want to play with friends you have to have the same console as them. Minecraft is still continuing to grow as more people by the game on mobile, PS4 and Xbox.